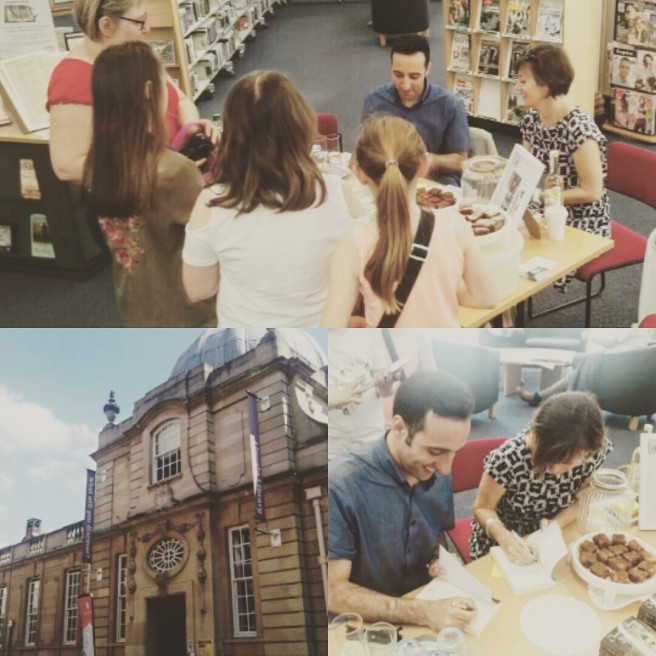 I first met the Lincoln-based artist Charlotte Kessler at Leadenhall Market in the City of London, where she was exhibiting and selling her paintings. I was working nearby at the time, and often popped into the market to have lunch at a small café that served hot meals like large chicken escalope with chips and beans…mmm! (No, I’m not remotely recommending that for lunch every day…)

On one of these afternoons, I was milling about the various stalls for a few minutes before heading back to the office. That was when my eyes caught a beautiful painting of a girl with locks of hair flying in the wind near rocks along a coast, with a lighthouse behind her. I approached the stall, and eventually got into conversation with the artist, Charlotte, who almost managed to persuade me to buy it. In the end, I opted not to make an impulse purchase of expensive art at lunchtime (!) and instead bought a small print of the painting. She gave me her business card and I promised to keep in touch.

Time flew by. A few years’ later, when I was in the process of publishing the first Jennifer Brown novel, I thought how good it would be to have a piece of original artwork for my book cover, rather than something generic. Charlotte’s painting (by then framed and on my living room wall) was exactly the sort of thing I had in mind, and her style seemed a good fit. I fired off an email to her to ask if she’d be interested, and the rest, as they say, is history. Charlotte has a great blog post showing how we developed the concept together.

A few weeks’ ago, when Charlotte was exhibiting some of her recent artwork in Lincoln Library, she invited me to join her for a joint book signing session on a Saturday. I was of course delighted to go up–I had been to Lincoln only once before and it’s a lovely cathedral city. I particularly wanted to walk up the ‘Steep Hill’, which is a street along a literally steep hill that leads up to Lincoln Cathedral and is lined with small shops, pubs and tea rooms.

I got up early to head to Paddington station to catch the train to Lincoln. I’ve always been a train person and there’s nothing more pleasant than an early morning train ride whisking you out and away from the big city. (Yes, assuming you have a seat and the carriage isn’t jam packed…one can dream!).

It was a warm, sunny day when I got to Lincoln station, and just as well as I was only wearing a light shirt! I had brought a bag full of books with me, and obviously I was hoping I wouldn’t be dragging them back to London at the end of the day! Charlotte had recommended that I go to a small coffee shop across the road from Lincoln Library (apparently where they serve the best coffee in Lincoln!) and meet her there before the event started.

Charlotte arrived and we headed into the library. We were greeted by the staff, who had already put up a small table for us to sit at. Charlotte had brought some home made brownies to keep us (and the children!) going, and we dutifully munched through them all day. As the weather was nice, things got to a slow start (who wants to go to the library on a Saturday when it’s sunny outside?), but luckily it wasn’t too long before families starting wandering towards our table and we were kept busy answering questions and taking turns to sign copies of the book.

We took a short break to see a little music event taking place in one of the rooms for hire in the library. A man (well known in the area, apparently!) was playing a tune using musical instruments he had made out of various mechanical items.

I always enjoy answering the different sorts of questions that both children and adults will ask about my stories. At the library, one child asked how I got the idea for Jennifer Brown whilst another wanted to know when I’m going to finish writing the second book! Several of Charlotte’s friends came by with their children and I was also pulled into various conversations about how long it takes to write a book and what it’s like to live in London.

After the event wrapped up, we went for a drink before driving to Charlotte’s mother’s house for a long dinner and lots of conversation, which veered off into politics (why couldn’t we just talk about fairies…!?).

It was getting late, so Charlotte drove me to the small bed and breakfast in the outskirts of the city, where I had booked to stay. By the time I got there, it was way past midnight. Rather than going to bed immediately (which I probably should have done), I ended up chatting for over an hour with the couple running the B&B. Finally, after a good night’s sleep, I got up early in the morning to catch the train back to London.